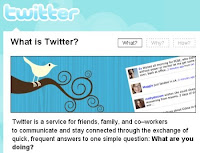 The paragraph above represents what I will say in the next several paragraph in Twitter-speak. Just shy of 140 characters, I’ve learned brevity in my first 100 days with Twitter.

It was late March when I signed up for an account on Twitter. I had begun noticing @ signs in status updates on Facebook and decided they must have some relevance. I’ve never exactly been an early adopter of new technology, but I like to stay somewhere near the front of the pack, so I began to investigate. I discovered that they had to do with Twitter. My first real exposure came at a meeting in Nashville of 10 young UMC clergy and a “liveblog” conversation. Several others in the room had Twitter accounts and I saw people joining in from all over the US simply because they had been invited via Twitter or Facebook. Several weeks later, some from this group had a live blog bible study where we used our Twitter accounts to sign in. This finally provided the motivation I needed to sign up. I followed a couple of the UMC young clergy folks and then they started introducing me to their followers. I found a couple of folks that were connected to circles that I was interested in and started following some of the people they followed, and voila, suddenly I had dozens of followers and I was following dozens of people. Initially, I tried to figure out how Twitter “works” by watching what others did.

I went on a mission trip in May and daily gave an update on Twitter (which also updates my Facebook status). My students ridiculed me for not being able to step away from Twitter, even during our trip. I didn’t see it that way. I did it on the off chance that someone might care the first day and then got quick notes from folks who told us they were praying, they enjoyed our updates, they were with us in spirit, which motivated me to keep tweeting. I’ve run into folks from Twitter or Facebook all over the area that have asked about our trip and it’s been a great chance to share about the good work that we did. Perhaps it was a shallow or vain connection, but it doesn’t feel that way at this point in time. I know that some believe that Twitter is almost too transparent. Who cares what my friend ate for breakfast? However, my stance has been that I only share what I want to share. If someone only wants to read my more “substantial” tweets, they can (which usually includes a tinyurl link). If someone wants to read my short movie review, then great! I can, however, see how Twitter can be addictive. Occasionally I find myself checking Twitter a mere 15 minutes from when I checked it the last time. But, as it is with anything, boundaries are important. I have found that Twitter can be addicting, but that it is not inherently a time drainer.

Twitter became a whole new ballgame for me in May when several others whom I follow were tweeting during Annual Conference. Given some responsibilities that I had during conference, I was not able to use my computer to follow the hashtag #kswumc, but I followed along on my phone when I could. I was amazed when I realized that people from other annual conferences were following along with the “transcript” being provided from about 10 different people present at AC. Amy Forbus of UMR even blogged about it after day 1. Since we were one of the earliest Annual Conferences, other people on Twitter began to generate interest in their own AC’s. Andrew Conard compiled a running list of conferences that would Twitter. The most interesting thing about this to me was the transparency that was a result because of the multiple eyewitnesses giving their perspective of conference. People often showed their allegiances by offering commentary on items of debate. Comments by Bishops, preachers, or delegates on the floor have now had their words “heard ‘round the world.” I’m actually a fan of this type of accountability. Sure, things can be taken out of context (but that can happen regardless of whether a running transcript is happening), but Twitter provided a clearness of communication that has heretofore been delayed by time or simply lack awareness of the information. After my experience with Annual Conference, Twitter became a place where action “happened,” as opposed to a place where what happened was being reported.

Twitter has become a diary of sorts and is filled with the important and the mundane. There are times when my important things can possibly be of interest to another fellow journaler. And there are times when I just take solace in knowing that my friend sometimes gets stuck in the slowest grocery line, too! The humanity revealed by Twitter has been a comfort to me. I’ve seen a bit of personality behind a name that I might know from the articles or books that they write. I’ve been clued in to subjects of interest from a link that is provided. I’ve even seen a picture of my friend’s toddler as he grows up far away. Twitter has become a medium to connect. Some have argued that it is a shallower connection. Perhaps that’s true. But the connection that has been made possible via a series of 140-character notations has allowed for a sense of camaraderie, a place for education, and dare I say, even inspiration, as people are given a new way to connect. And connecting is a good thing.
Posted by Ashlee at 4:01 PM

Ashlee - I appreciate your reflections here. The narrative is honest and it provides a good picture of your experience.
I did enjoy the experience at Annual Conference and have been amazed at how that has spread. Thanks for the connections.

Congrats on the reporter publication

I read your post on UMR and really appreciated it. I am a baby boom pastor with Gen X kids and it really helped me understand the validity of the community of 140 characters, something with which I have been struggling and arguing about with others.